I recently had one of the most intensely difficult, painful, draining yet joyous, moving experiences of my life. On July 6th, 2013 I participated in the Sinister 7 Mountain Trail Race. (www.sinister7.com)

It really is sinister and yes you really do feel all those sensations and emotions over it’s 148km distance. As if that distance isn’t hard enough there’s 18,000 feet of climbing and descending, mud bogs, river crossings and a 27 hour time limit! Located in the fantastically beautiful Crowsnest Pass in south-western Alberta Canada, it’s mountains are located right on the continental divide. It has a rugged beauty all it’s own!

Preparations
In order to prepare for this beast of a race I had a plan in place that took up 7 months. I have run for 40 years and have competed in many marathons, half marathons, 10k’s 5k’s, you name it, so I wasn’t starting from ground zero. Nevertheless I knew that the training that was going to be required for this beast was something entirely different. Less speed work and more long slow distance. It was going to require many hill repeats on our small ski hill here in Collingwood Ontario. It may only be 720 feet high, but 5 repeats of it in the middle of a 30k run was not much fun!

So many times I remember running 30 to 40k in the middle of nowhere seeing my road cycling friends go by and wish me luck. Every month the grind went on with no seeming end in sight other than a vague idea that July 6th I’d somehow get through the 7 grueling legs of the S7 in one piece in under 27 hours.

Through an unseasonably cold spring, the training continued. With a feeling of constant soreness in my body and feeling completely drained I pressed on. Sleeping was easy. Eating was also easy! I got down to 165 pounds on my six foot frame despite eating a lot with my sons aged 21 and 17.

It was tough but also toughening to put in up to 120km per week leading up to the race, and when the tapering period came up 10 days before it felt strange. Taking days off and running 5 to 10km easy to stay sharp and build reserves sounds easy but can be tough to stick to!

The Race
On the morning of the race I woke up in my tent filled with nervous energy but not as much as I would the morning of a 42.2km road marathon. I had nothing to prove. I had run 100km before non-stop, but this was uncharted ground and there were no expectations. No pressure.

At the starting line everyone was upbeat with nervous laughter filling the air. The cool mountain air of the night made fog which was only starting to burn off in the heat of the rising sun. The gun went and we were off and running from Blairmore towards the Frank Slide, a huge mountain rockslide that covers the road with rock from time to time.

After the slide we climbed up to the base of Hastings Ridge. I felt super good and filled with energy and optimism about the remaining 6 legs.

On leg 2 any feeling of optimism and feeling like it was attainable was dashed on the rocks! The climb up Hastings Ridge was a tough one but at least it was still cool. At the apex of the climb the view opened up to something so spectacular that it literally took my breath away.

The descent ended up being tougher than the climb in some ways. It involved mud slicked forest trails for the last third of the distance. The constant relentless descent pushed my feet against the front of the shoes causing some serious toe blistering. At the time I didn’t think anything of it.

One river crossing and I wound my way down to the tent city at transfer and aid station #2/3. After refueling with all sorts of fruit, breads, candy, gels, electrolyte drink and water, I headed back out.

Affectionately named “Satan’s Sack” by the runners, this leg is a hideously challenging one.

One thing I know about running such long difficult races is that my emotions sometimes feel amplified. Positive or negative emotions are more intense. Controlling these emotions and pushing through the tough times is for me the tough part about ultra running. For example the views were so spectacular that I teared up with joy and awe. This leg’s huge 4,500 feet of vertical was a challenge particularly in the heat that came in the mid day even at altitude.

This leg began with a change of shoes and socks for me and the first hints that blisters were developing under my toenails from the punishing descents and from being wet from crossing rivers.

Immediately I found myself climbing a decent sized ski hill. The climb seemed to go on forever followed by ducking into the woods where things got a little muddy. After jumping a fast flowing creek onto a mud bank on all fours I found it opened into a long flat valley that reminded me of a really long golf course fairway without the manicured grass of course! In the distance was a beautiful rocky peak that was so distant that it seemed to take ages to get close to. After passing that mountain it was a climb up to the 100th kilometer and the end of 4. At only a couple of km from the end of the leg there was a despicable gravel valley with a pond at the bottom followed by the same type of gravel on the climb-out. At this point I was running by headlamp and had my jacket and toque on because the temperature went down to 8 celsius. After stumbling down the valley I slipped and fell into the pond soaking me from head to foot.

After reaching the aid station at the 100th km I began shivering in the line to drink as much chicken broth as I could and to eat meatballs. The shivering would not abate and the doctor at the medical tent suggested I sit down. They wrapped me in blankets and he told me that I was going into shock and hypothermia and that I should withdraw from the race to avoid serious medical problems and a potential ATV rescue. Two toenails were coming off at this point as well. Had it not been for the shock I’d have duct taped my toes and continued, but it was not to be in 2013. 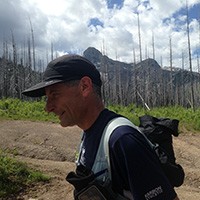 I consider Sinister 7 to be my Apollo 13 – a successful failure. It was a hard pill to swallow but at the end of the day I’m proud to have covered 100km and climbed and descended 14,000 feet in 17 hours. It was successful because I learned so much from it.

I learned that I had to find trail shoes that had the perfect shape for my feet particularly in the toe box area. I found the Brooks Cascadia shoe and I’m training in them now for months with no issues.

I feel the training I did last year was not the issue so I’m following a similar routine this year and I’m heading back this July! That’s right – I’m doing Sinister 7 2014 and intend to finish this time! Sure they went and added 12km to make it 160km total and a true 100 miler, but that will not stop me now! I found out a lot of things in those mountains, but the most important find was myself. I found out who I really am, what I’m made of and I discovered that my life’s mission is to inspire and help others.