Snowshoes have been around for thousands of years! They provide a method of increasing the surface area of the feet to increase flotation on deep snow as well as provide extra traction.

The original classic design featured a wooden frame with rawhide lacing. Snowshoes were essential tools for fur traders, trappers and anyone whose life or living depended on the ability to get around in areas of deep and frequent snowfall.

In modern times snowshoe technology has evolved to include lighter stronger metals, highly adjustable bindings and claw like crampons under foot. This has resulted in lighter snowshoes with more traction. These modern snowshoes come in a variety of shapes and sizes from deep power to smaller running snowshoe types.

No matter how you choose to participate in snowshoeing you can read about it here. Need some snowshoes? Check out our Snowshoe page. 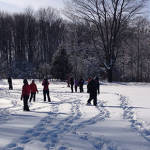 What better way to celebrate the long cold winter than to combine a snowshoe tour with a wine tasting! On Sunday January 25th, the Georgian Triangle Hikers/Snowshoers set out on a snowshoe through the Kolapore Uplands and to the top of Metcalfe Rock. The day was bluebird sky with bright sun and reasonable temperatures. Not […] 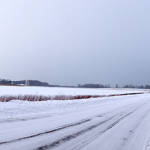 Winter blew into the eastern seaboard early this year, in some cases by November 18th! Buffalo got 6 feet of snow in one storm and most places in the areas of the great lakes were thrust suddenly into winter from fall. As an ultra trail runner I find it difficult to keep up the training into […] 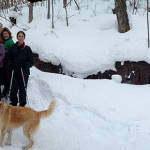 The winter of 2013/14 will be remembered as one of the snowiest, coldest, longest lasting ever. The weather patterns caused by the polar vortex resulted in a winter in which the temperatures were much colder than normal without the usual thaw periods found in the Collingwood, Ontario, Canada area. The Georgian Triangle Snowshoers group made […]