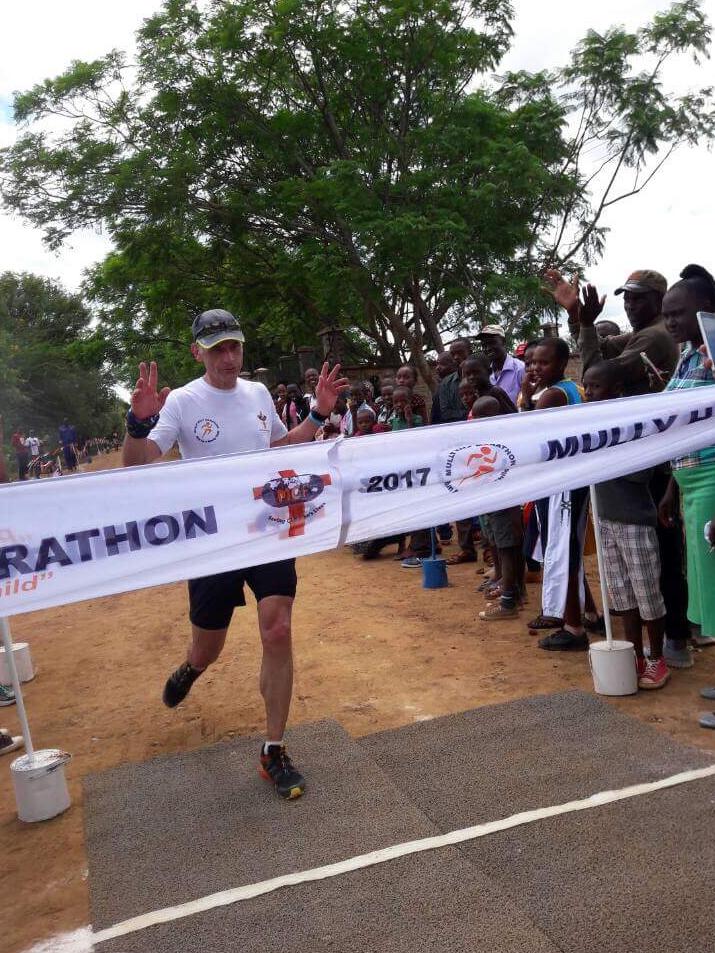 As a race director and lifelong runner who coaches Kenyan athletes remotely it has always been a dream of mine to run in Kenya. There is something very compelling about going to the country that has the reputation of being home to the fastest humans on the planet. In May of 2017 through some twists of fate my opportunity to go finally came.

I was asked to produce a website promoting run tourism for runners from North America to participate in the Mully Half Marathon, a race designed to raise funds for the Mully Children's Family. These funds provide housing, food, medical care, clothing and an education to thousands of orphans and street kids. It seemed only fitting that I would participate in the race to find out what we were promoting.

Beyond the first week with the children of the Mully Children's Family I was able to travel 350 kilometres north of Nairobi to Nandi county to run with elite athletes I know in the towns of Kapsabet and Eldoret. These towns are located in the hilly country at 6,600 feet and above, which partly explains the incredible cardio capacity of these amazing runners.

During my time at the Mully Children's Family facility in Ndalani Kenya I was privileged to have been able to meet hundreds of children of all ages. I spoke to them at assembly and was able to run with them.

My message was simple. Running can be a way of life and a way to stay healthy over the course of their entire lives. This is quite a new concept for a lot of Kenyans who train to win and to be the fastest at all costs. They feel that their livelihood and all opportunity is entered around this idea and often give up running in their 30's if they don't become the next world champion. That idea is reinforced by the fact that there are generally no participation medals in most races - only top 3! I wanted to say that it's a great metaphor for life and not to be discouraged and give it up.

On the second last day of my stay at the Mully Children's Family facility we were transported by land rover out to the start of the race in nearby Yatta. The dew was still evaporating as we drove the dirt road out to the highway past roadside stands selling all sorts of goods.

Upon arriving at the starting line the other Canadian runners Ross and Bernie from Calgary and I were surprised that they were still taking roadside registrations and had large lineups. The banner was still being strung across the road and the race marshals, members of the Kenyan police were present in large groups. They were all armed with automatic weapons so I doubt any drivers would cut off any runners or cause any other sort of nuisance.

We were quite a novel addition to the race as the only 3 Mzungus (white men) participating. Kenyan national TV (NTV) was quick to interview us to ask about our goals and what the race was raising funds towards. In fact it was the exact opposite of North American races where there is a lead pack that invariably includes Kenyans that breaks away. Instead it was a large pack of very fast Kenyans leaving the 3 Canadians in the dust!

The heat that day was nearly unbearable as Yatta is nearly on the equator so the sun was almost directly above us. Heat from above combined with the heat reflecting back up off the road cooked us. This was compounded by the fact that the start time had slipped by nearly three hours! We had hoped to start before the sun had gotten very high, but the race day registrations had taken longer than expected. This is why most races in other parts of the world have pre-registration with online registration and payment. Be prepared if you do race in Kenya to pay cash or using your phone with the MPesa app. There might not be pre-registration!

Oh that heat! At home I'm capable of something close to a 1:30 half marathon and maybe I'd take a sip of water half way so that I can keep the pace up. This was definitely not the case in Ndalani/Yatta that morning. As the race time had slipped and the equatorial sun crept higher, the pavement got to blast furnace status.

I started at what I thought was a reasonable half marathon pace like I normally would. The bulk of the race of super quick Kenyans receded ahead and I settled down into a pace I thought I could sustain, being careful to take water whenever it was offered.

About 10K in I had climbed a couple of hills and was completely soaked through! I had also used 3 bottles of water in just 10K! Be prepared because in Kenya most races have no electrolyte drink along the route at all, just warm bottled water. Most elite Kenyans will not take water in a half marathon anyway, but some did on this day given the temperatures.

At 15K I passed a very fast looking young Kenyan who was sitting in the ditch with his head between his knees. I stopped to ask if he was alright and he insisted he was. Since he looked like he had heat stroke I gave him an unopened bottle of water I'd been handed and a couple of guys on a motorbike arrived to look after him.

Moving right along, a couple of things over the last 6K struck me as odd. One was that the race had no cones or barriers so that you really had to be careful to watch for cars and trucks whizzing by. The other thing was whenever I passed a crowd who had come out to see the race from a small village they seemed completely astonished! They must have been completely astonished and wondered who the 50 something white guy with grey hair was! As I passed them, some yelled out "Mzungu! Go Mzungu!" and others laughed outright. I really didn't take it as an insult because I'm quite certain the laughs were the type of laugh you get when you catch someone completely off guard. After all, not many Kenyans in their 50's or even 40's are competing at running or even running at all. This is something I'd like to change for the sake of their long term health.

At the 20th kilometre I reached the place on the highway where the race turned onto a dirt road for the last 1.1 km. I had consumed 8 bottles of water and looked like I had been swimming due to the sweat. I'd never been so happy to be close to the finish line.

At the finish a nice finish tape had been strung across for me as the first Mzungu to finish. I had actually beaten some Kenyans much to my surprise as well given my slow 1:57 time. I truly felt like a celebrity although I know it was really just that Kenyans are very hospitable welcoming people for the most part.

Another way that running is different in Kenya is that it is revered and celebrated the way Americans celebrate football or how Germans celebrate soccer. In Canada or the US after a race, there may be a modest medal presentation for the top 3 in various age groups, but the vast majority of runners get a participation medal. In Kenya it's medals for the top 3 only. It's is the dream of every young Kenyan to win at running. The podium is all they are shooting for. Success can mean travel, sponsorship, scholarships, in short a better life for them and their family.

At the finish line my friend Edinah Rotich was there to make sure I didn't drop from heat stroke and to get me to the massage area where a young therapist worked on my calf and achilles area which had only recently recovered from injury. Edinah is a top volleyball player on the Kenyan national team and an ambassador for clean sport/anti-doping as well as a guard to the first lady! I was in good company.

After my massage I was ushered over to a large rectangular area that was surrounded by open tenting with seating underneath. We were afforded VIP seating near the race officials and the man himself, Dr. Charles Mulli! There were speeches, choirs, presentations of every kind. For me personally the honour reached it's peak when I was asked to present the medals and bouquets of flowers to the top 3 finishers in the half marathon who had run under 62 minutes!

When the ceremony which was attended by hundreds of people was finished we were invited by Dr. Mulli to a big barbecue meal to cap off an amazing event and day. Although there was some meat at the table, I kept to my vegan diet. It's quite easy to do in Kenya with the fried greens, ugali, corn, rice, potatoes and other vegetables in abundance.

During the ride back from the race I reflected on how lucky we were and the generous, loving character of the Kenyan people. I was made to feel welcome despite being from a different place and having a different colour & customs etc. I think a lot of other cultures could take a cue from Kenyan culture when it comes to not only accepting the differences of others, but celebrating them! I will always have a special place in my heart for my Kenyan friends and they are welcome here any time.

Morning trip to the starting line. 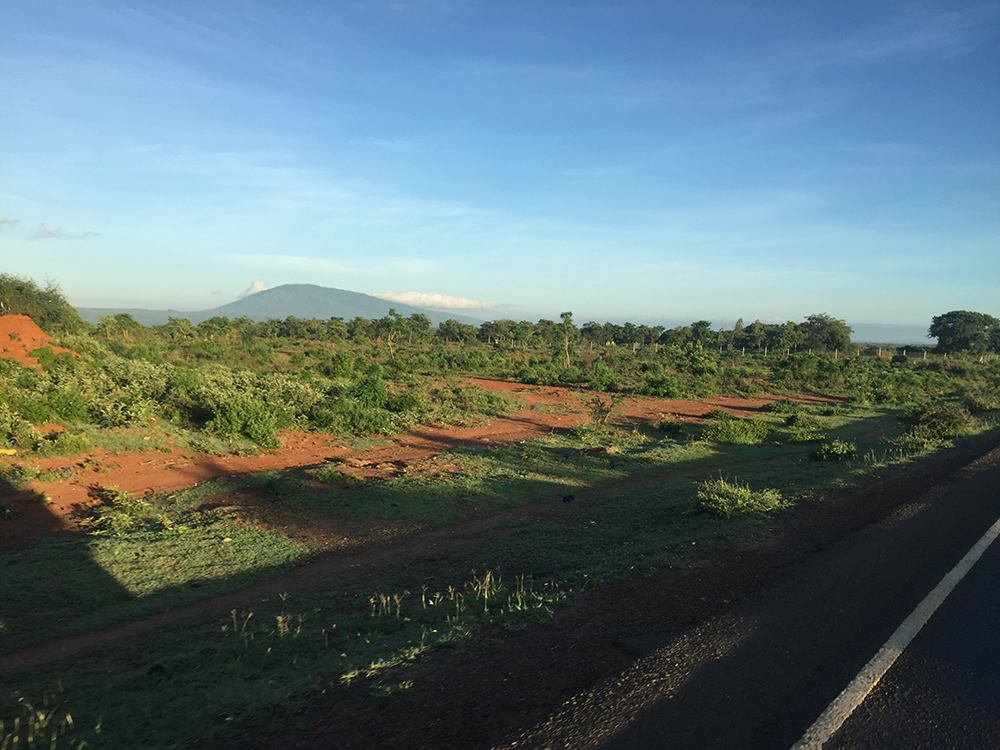 Picking up the race bib. 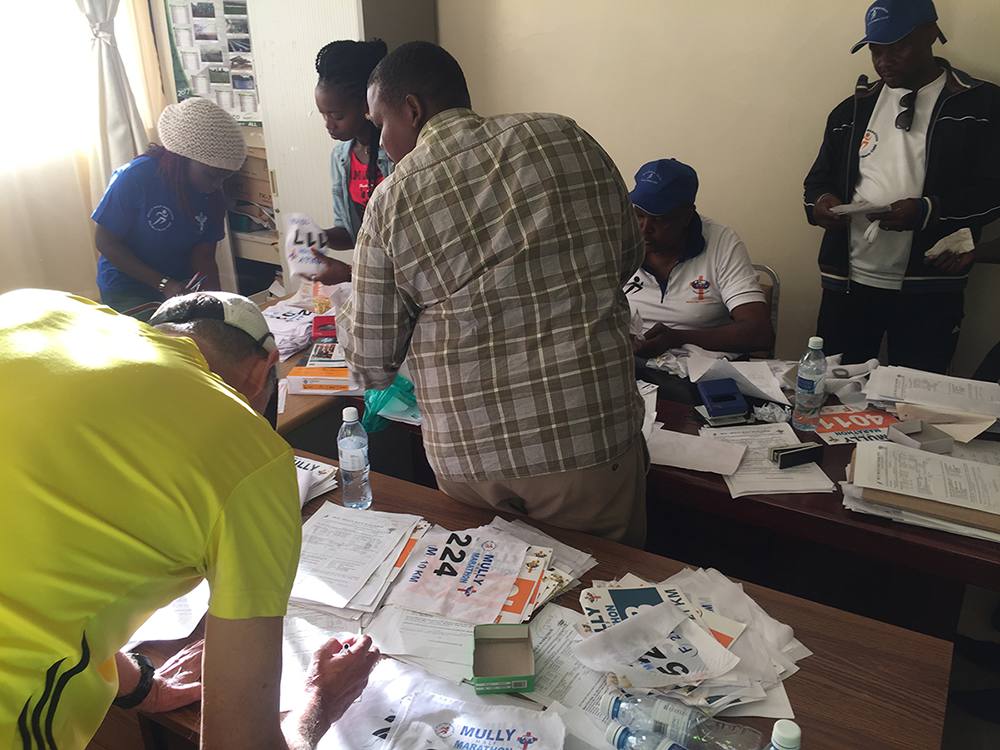 Kenyan runners at the starting line. 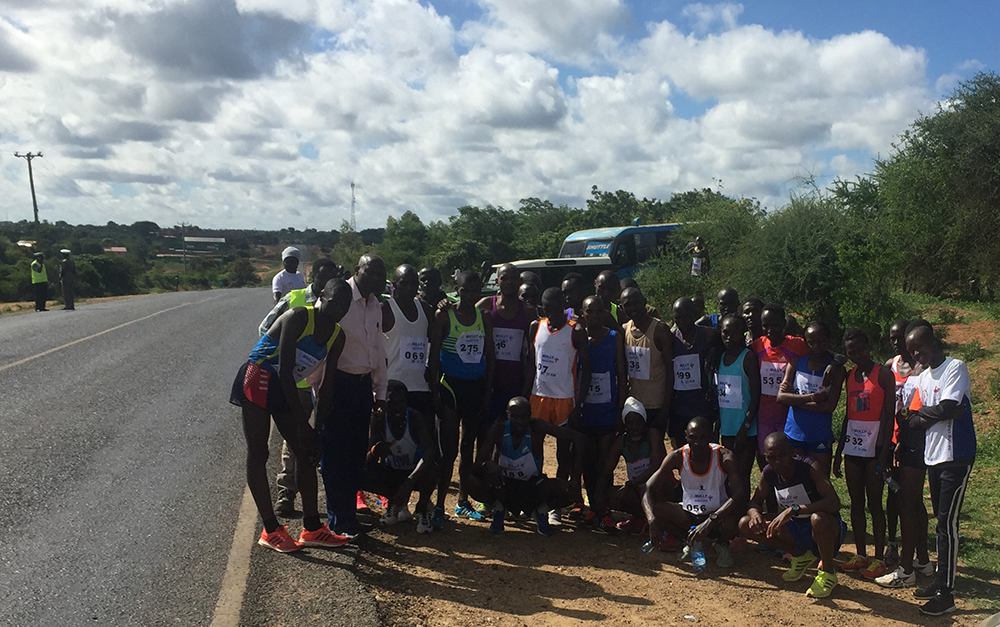 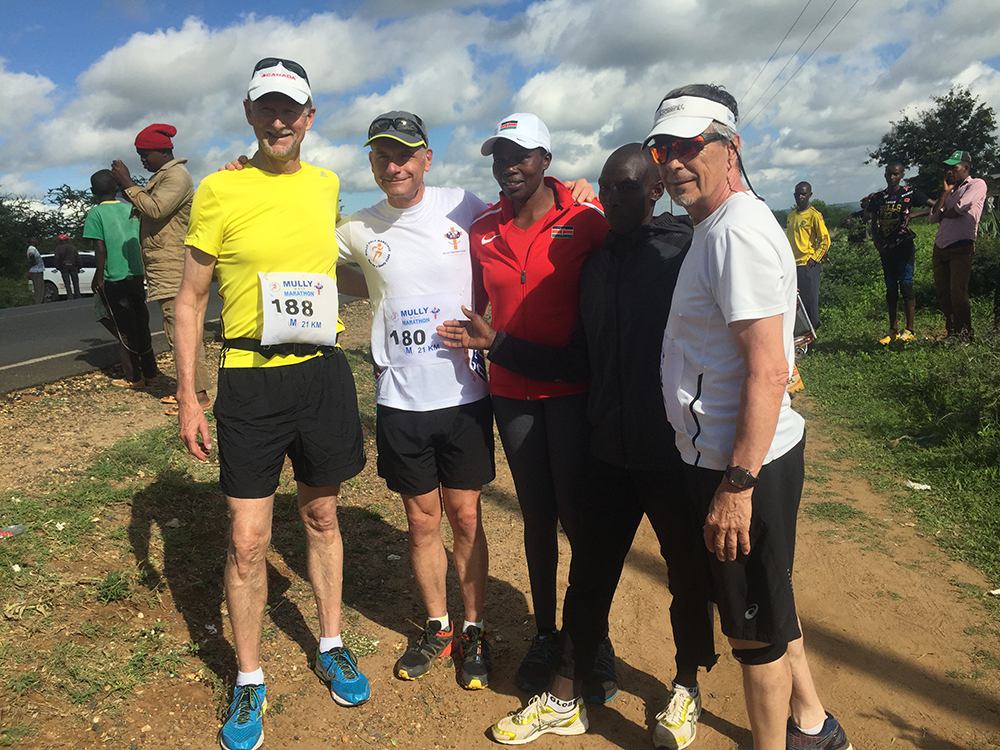 Finishing like a winner despite being near the back! 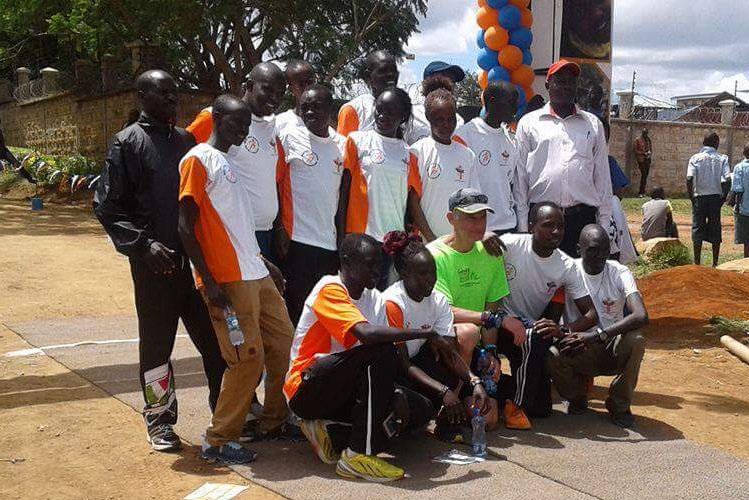 A massage and shade! 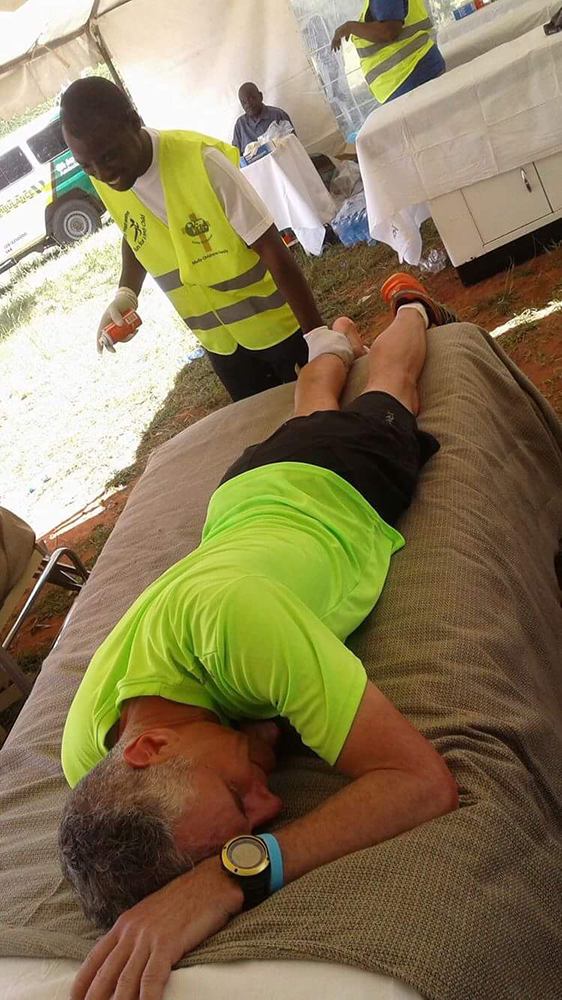 Kenyan choir at the medal ceremony. 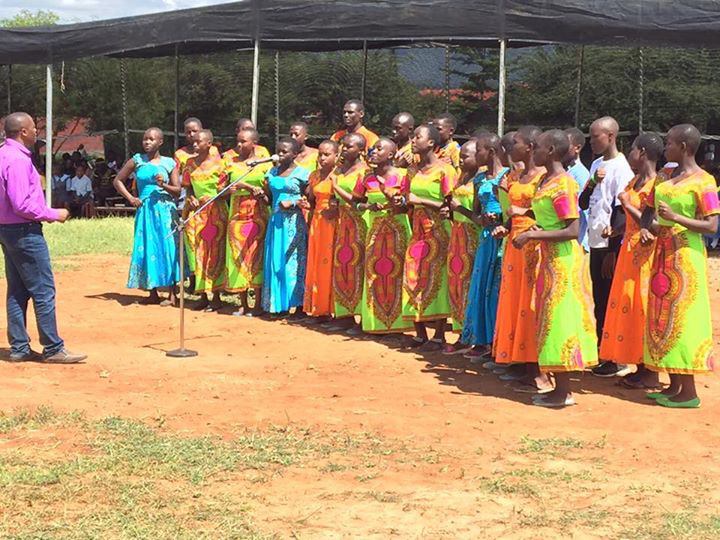