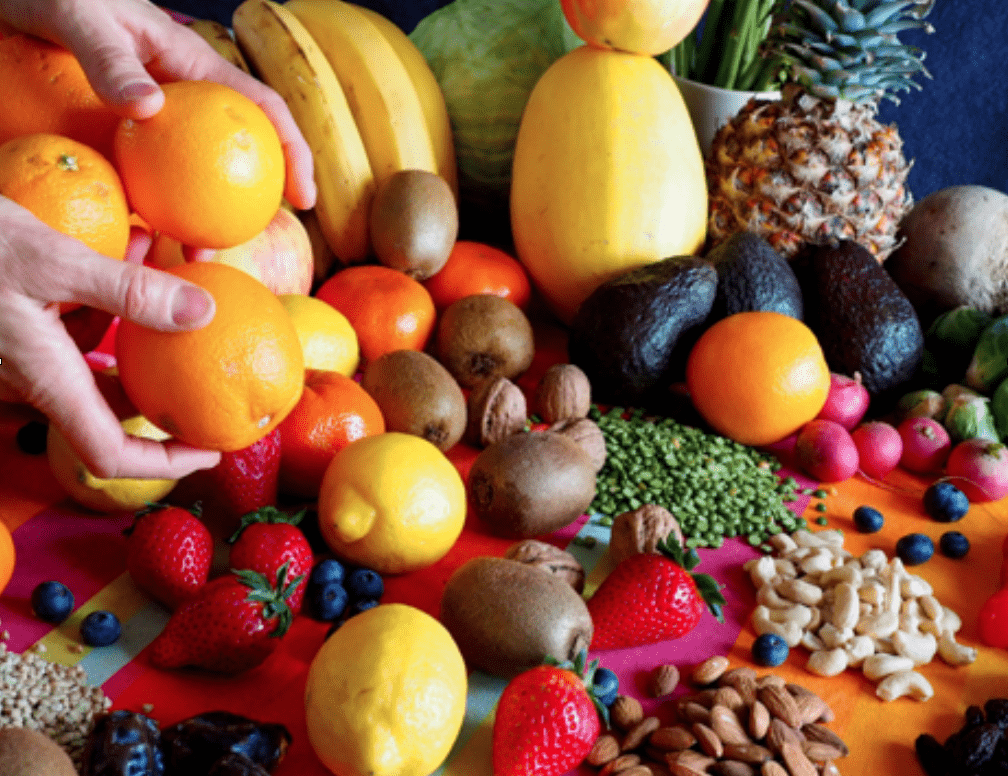 Our family’s transition to plant-based food

Only a few years ago my life looked completely different. With two young children, then 12 and 14, and our own business, I was working 24/7. I did volunteer work on the side, and had no time for myself. We lived on a Caribbean ‘paradise’ island. Every now and then we dropped everything to go to the beach to enjoy the spectacular turquoise waters. It was a good life, but something was missing, although we didn’t know what at the time. Then two things happened: during a hiking holiday, we asked ourselves: what do we really want from life? The family brainstorm opened up new doors and windows, and fresh air started to come in. This opening would eventually bring us to Canada.

The other change was more practical. That is specifically what I want to share right now. We were already eating a vegetarian diet, and had brought up the kids as such. Besides, we tried to eat as much organic as was possible on that faraway island. However we had picky eaters in the family. My husband didn’t tolerate dairy, and my eldest son ate cheese with everything, but didn’t like eggs. He was not interested in vegetables, and ate excruciating slow (except pizzas, of course). Our youngest didn’t like cheese, was intolerant for peanuts, and was a picky eater in general. There were many more foods either undesired or not accepted by one of the family, thus cooking was a difficult task. I became uninspired due to all the restrictions. Whereas I always had liked cooking, the fun was gone.

Growing up, our eldest son became very interested in sports. He participated in running and swimming races, and began competing in triathlons. A family friend, also a triathlete, recommended to read Thrive by Brendan Brazier. This sparked a huge interest in him, as the book explained and educated about the benefits of whole-food  plant-based diets for athletes. Another book that was introduced into our family, Eat and Run by champion ultra marathoner Scott Jurek confirmed the Brazier book’s findings.

My son decided to try out a plant-based diet for himself. I have to admit I was not thrilled when he announced this, as I was already cooking 3 different meals every night. With little time to spare, cooking had become an annoying chore. But he was persistent, so instead I decided to cook plant-based for all of us. Little did I suspect at that time what an immense positive effect this would have on our entire family.

With new inspiration, we started cooking together, while looking for new recipes and combinations. And to our surprise, a whole new world opened up. Cooking became fun again, a real adventure. We started baking in a different way, and researching recipes. We all ate the same food, and felt very good about it. We began to notice other things: we felt more energized and lighter after meals. We started to feel happier. At about the same time, we slowed down our busy business. We decided to choose for more quality of life, with less security; and we closed the doors of the showroom, opting for smaller scale projects. With that, we got more spare time, and inspired by our son, we started to exercise. In the beginning, I barely reached the end of the street. But after two months, I tried a 5K race. The 5K became a 10K …. and the 10K’s became sprint triathlons…. My husband eventually did a challenging trail marathon. And we haven’t stopped since.

The fact that we ate plant-based food surprisingly turned out to motivate the children to eat a more varied and better diet. They felt very good about the fact that no animals were harmed and killed for their food, and became more conscious about what food was about, and the quality of food. They became more compassionate towards their surroundings, and aware of the consequence of food choices. It was not always easy though, as many kids at school started discussions, and of course teased them with their meals. We did not insist on anything, and left the choice to our children. However they became only more motivated, and it made them stronger.

Our tastebuds changed, and after a while, pizza and buttery bakery goods didn’t seem appetizing anymore, felt heavy on the stomach, whereas we couldn’t get enough of kale salad. We experimented with all kinds of smoothies and home-made burgers and salads, and we all love to be in the kitchen and create. We seldom go out for dinner: it is simply so much better at home. Our food creativity soared.

I started to read studies by Dr. T. Colin Campbell, and it became clear to us that even scientifically, plant-based whole food is a highly beneficial diet for humans. The scientific information supported what we actually experienced ourselves, as our mood and stamina increased. Instead of depriving ourselves, and constantly fall for sugary, fatty foods, we had now an abundance of food that digested easily. Our bodies feel healthy and lean (I lost more than 10 kilos while eating as much as I wanted); and I like to believe that the choice of food helps us to feel good, exercise plenty and recover quickly.

All this said: how hard is it to actually change your food and cooking style? Honestly, not many people have the luxury of time for lengthy researches in a life of busy schedules and little spare time. Yes, it does take time, and it takes a different way of looking at food. What helps is to be clear about your motivation, even if that can change along the way. It might be because you have compassion for animals, or you want to contribute to a healthier planet. It can be simply because you want to improve your own health and fitness, and maybe loose weight. If you invest two to three months to find your way and don’t put pressure on it, you probably look back after a while to be surprised at how easy it has been. It takes some time to “learn to speak the language”, but after that it is a matter of just going for it and actually eating this way. Fortunately, there is an abundance of good recipes on the net. Just type you favourite food and add ‘vegan’ to the search engine: you can google almost any recipe in a vegan variety. Once you dig into it, with fun, you will discover a wild variety of recipes, websites, people and information that will help you discover a plant based, whole food diet feast.

And last but not least: how to motivate your children to eat plant-based? This might not always be easy. Discuss the changes before your start, and ask the opinion of the children. Saving animals usually appeals to children; explain and show them how animals for food are raised and killed, and very likely they will be more interested to go vegan. Start gradually, not overnight, by eating vegan every other day or integrate a new recipe in your existing cooking. Make sure to bake delicious baked goods: this will make the family happy.

I can only say: try it! Even for a little while … For us, the road to plant-based whole food (vegan) has been an amazing and enriching journey on many levels.

If you are interested, please see below tips for further reading (or have a look at my future website after the summer of 2015: palmtreesandsnowflakes.com).

Scott Jurek: Eat and Run (with some recipes)

T. Colin Campbell: The China Study (and the sequel Whole)

To find recipes (just a few among many)